Bi-unicompartmental knee arthroplasty (BiUKA) is an alternative to total knee arthroplasty for selected patients. Although it is thought to be technically demanding, the technique has not been previously described in detail. Kinematic alignment (KA) implantation and bone cuts parallel to the native joint line would be beneficial to ensure optimal mechanical loading. Here, we detail a technique for KA-BiUKA using the Oxford partial knees. The joint line is identified using the spoon of the microplasty instrumentation system with/without the accessory spoons. The tibia is cut parallel with the joint line using a side-slidable ankle yoke so that the inclination of the cutting block is parallel with the spoon surface. After defining the horizontal bone-cutting lines, the predominantly affected condyle is operated upon, followed by the lesser affected condyle. Although custom-made devices are required, the technique is useful and reproducible in the performance of KA-BiUKA with the Oxford partial knees.

Unicompartmental knee arthroplasty (UKA) is an attractive surgery for unicompartmental knee osteoarthritis with functioning anterior cruciate ligament (ACL) [1,2]. It is characterized by quicker recovery, fewer systemic complications, lower postoperative mortality, and better range of motion than total knee arthroplasty (TKA) [3-5]. Another advantage of UKA is the retention of the ACL; once the ACL is sacrificed to facilitate a TKA, minor instability and alteration of kinematics are inevitable [6]. Unlike TKA, the original kinematics and joint stability can be retained in UKA, with improved patient satisfaction [7-9].

Despite these benefits, the usage of UKA depends on the integrity of the lateral compartment cartilage [10]. If the lateral compartment is damaged, conversion to TKA is unavoidable, even if the ACL is healthy. Bi-cruciate retaining (BCR) TKA is a possible alternative to conventional TKA, but it is a technically demanding procedure, and the results are not always consistent [6,11]. As described in the four-bar linkage theory, the ligament condition and morphology perfectly correspond to each other. If the morphology of the component matches the native morphology, the results can be excellent; otherwise, tightness and looseness inevitably emerge at certain angles. Complete replication of both medial and lateral components using existing TKA components is thus virtually impossible.

Bi-compartmental knee arthroplasty (BiUKA) is a potentially useful alternative to BCR because both compartments can be resurfaced individually [12-14]. Moreover, the kinematic alignment (KA) procedure is also possible if the components align with the original coronal joint line (CJL) obliquity. Performing KA-BiUKA with Oxford partial knees (OPKs) is also beneficial because the femoral components of OPK are partly spherical, meaning it can serve as a good imitation of the cylindrical axis. Moreover, bone cuts implemented along the CJL might be advantageous for the mechanical properties. Despite such benefits, however, there are no previous reports on BiUKA using OPKs (BiOUKA) except for its initial stage [15], where the surgical technique and instruments are immature and staged BiUKA for lateral compartment osteoarthritis after medial UKA [16]. We have modified the microplasty instruments to ensure tibial cuts parallel to the joint line. And there are no reports of KA-BiOUKA using additional components. This technical note describes KA-BiOUKA using custom-made instruments in detail.

The indication of KA-BiOUKA is functioning ACL and cartilage damage in both medial and lateral compartments. Full-thickness cartilage defects should be found in at least one compartment. In most cases, BiOUKA is a conversion from medial or lateral OPK owing to the intraoperative finding of cartilage damage on the opposite femoral condyle. BiOUKA is not applicable for severe patellofemoral joint diseases, such as bone defects and subluxation.

Preoperative anteroposterior radiography is used for planning. The medial and lateral joint lines are identified as the tangential line of the tibial articular surfaces. If both lines are straight and on the same level (leveled type; Figure 1, Panel a), the medial or lateral joint line is considered to be the CJL, and the single-spoon technique is used (described below). Otherwise, in the case of uneven type (Figure 1, Panel b), the double-spoon technique is performed with reference to the posterior condylar axis (PCA) intraoperatively. The predominantly affected condyle is determined, and this is operated first. 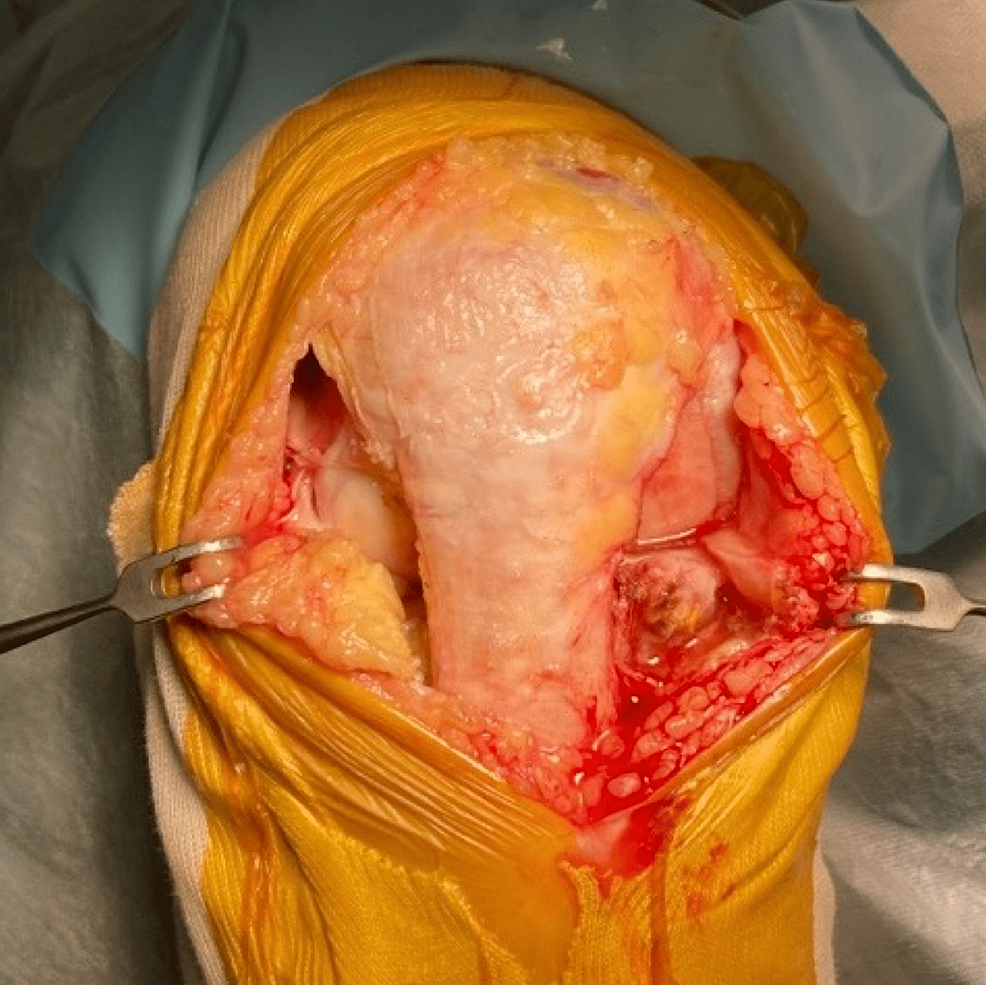 After joint opening and osteophyte removal, the tibial cutting plane is set parallel with the CJL. The single-spoon technique is used for leveled-type knees. The spoon gauge is inserted into the dominantly affected condyle, representing joint line inclination (Figure 3, Panel A). Our custom-made side-slidable ankle yoke is connected to the extramedullary (EM) rod instead of the original ankle yoke [18]. The sagittal inclination of the EM rod is adjusted so that it is parallel with the anterior cortex of the tibia. The cutting block is set just below the spoon. In most cases, the spoon is not parallel but rather varus to the cutting block (Figure 3, Panel B). The custom-made yoke is then slid laterally until the cutting block and the spoon are parallel (Figure 3, Panel C).

Figure
3:
The medial spoon technique for the cutting line definition

When the lateral tibial cuts are made, the shim is removed so that the cutting level is set to 2 mm lower than the medial cutting level. Both bearings are numbered, but the exact thicknesses of the bearings are 0.5 mm and 2.0 mm thicker than the labeled number. Complete leveling of both plateaus is therefore impossible when the level of the cutting block is constant (Figure 6). Eventually, the lateral CJL is inevitably 0.5 mm higher than the medial CJL, although this can be ignored.

The actual thicknesses are 0.5 mm and 2 mm thicker than the labeled number. Once the shim is removed, the lateral cutting level is 2.0 mm lower than that of the medial one. Eventually, the lateral bearing surface is 0.5 mm higher than the medial one when the same number bearing is used with the same cutting block level. 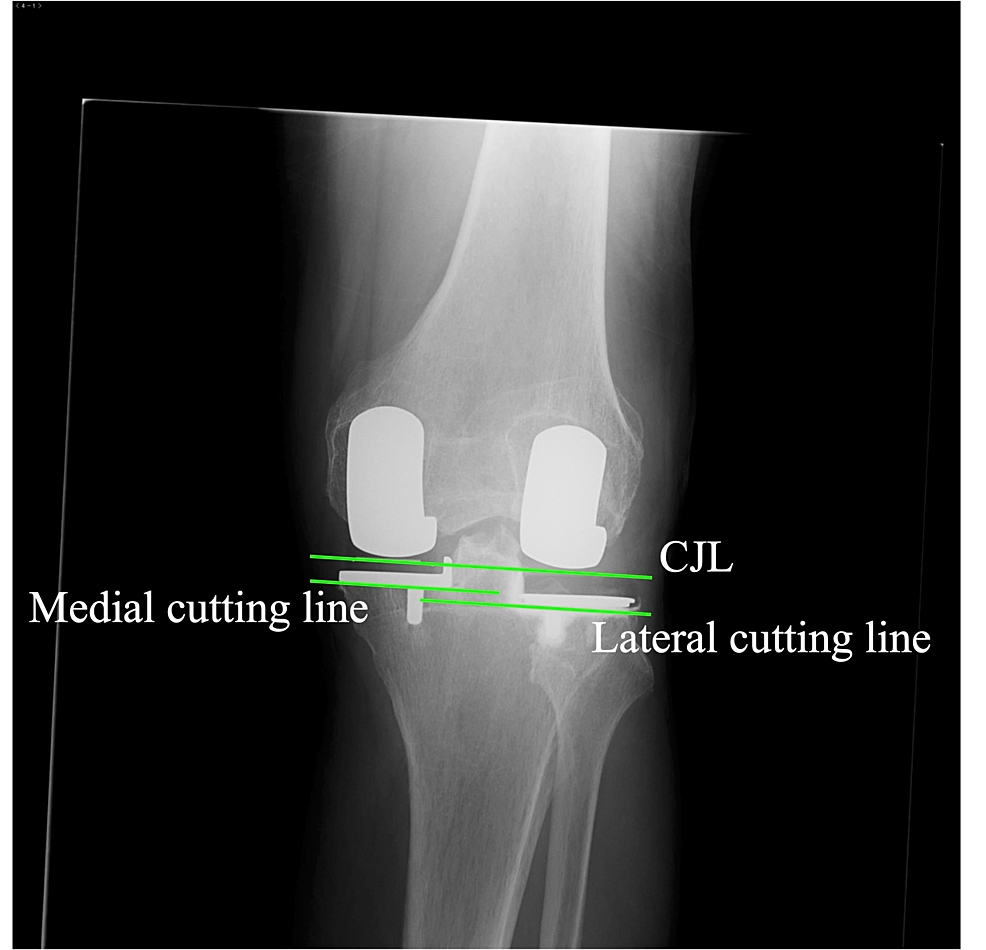 This is the first report to document KA-BiUKA by OPK in detail. Robotic-assisted BiUKA using a fixed-bearing component was recently reported, and constitutional whole leg alignment and joint line obliquity were shown to be restored [19]. Regarding OPK, it was used for BiUKA in the initial stage of the OPK [15]. Pandit et al. reported the staged BiUKA – adding a lateral UKA after medial UKA due to lateral compartmental osteoarthritis and showed satisfactory results [16]. More recently, a gait analysis showed that the subjects with BiUKA using OPK had similar gait characteristics to the normal subject compared to TKA subjects [20]. BiUKA has been reported to have mechanical advantages. A compression force on one component would cause a lift-off of the other component in the one-piece TKA component, but it never occurs in the two-piece tibial components in BiUKA [15,21]. The bone-cutting line was not shown in the previous studies; however, it is thought to play an important role in load transmission. A slight varus implantation of the tibial component was reported in previous biomechanical studies to reduce stress concentration in the medial tibial cortex, but a valgus placement increases it [22]. Although avoidance of valgus placement is important, the placement can be valgus against the proximal tibia in knees with tibia vara, which is especially prevalent in Asian patients [23,24]. Component placement parallel to the CJL might enable a proportioned load transmission across the joint.

In our technique, the dominantly affected compartment is operated upon prior to the lesser affected compartment. In this sequence, the operated condyle is always normal or nearly normal. By contrast, the procedure of the lesser affected condyle can be influenced by the disease of the opposite condyle, such as contracted or relaxed soft tissue and cartilage as well as bone loss. Our technique is a tibia-first sequence, in contrast with most KA-TKA techniques, in which the femur-first technique is used [25,26]. However, this is a standard technique in OPK and has been used for more than 40 years [27]. The tibia-first approach and incremental gap adjustment using the milling system can facilitate easy and precise adjustment of flexion and extension gaps. We believe the dominantly affected condyle-first and the tibial-first sequence might be ideal for facilitating the KA-BiOUKA.

There are some limitations in our report and technique. First, it was necessary to use custom-made devices (accessory spoons and side-slidable ankle yoke). Although a similar operation can be performed without the custom-made devices, where the cutting levels are decided individually using the standard spoon, the cutting plane is not parallel to the CJL. The CJL could be made parallel to the original CJL, but the kinematics and load distribution might be affected. Second, the lateral component is set in varus in the technique. This alignment is equivalent to a valgus placement of the medial UKA, which has reportedly increased the mechanical stress on the tibial cortex. Therefore, it can increase the risk of failure. Varus placement has not been reported to increase the risk of failure in lateral UKA. Third, there was no evaluation of clinical outcomes, in particular its superiority over TKA. A larger number of cases and long-term studies are needed to prove the benefits of the KA-BiUKA. Lastly, we used medial and lateral capsulotomy and disturbance of blood supply for the patella, followed by the avascular necrosis of the patella, and the anterior knee pain is a concern. The medial parapatellar approach for femoral and tibial bone cuts like TKA along with small lateral capsulotomy for lateral gap evaluation using the feeler gauge might be helpful. However, it might require additional instruments.

BiUKA is a great technically demanding operation; therefore, the establishment of the procedure is necessary for a fair evaluation of its effect. Our technique is considered to be easy and reproducible, so it can be implemented widely.

The details of an operative technique of BiUKA using OPK are presented as an alternative procedure for osteoarthritic knees with a functioning ACL and cartilage interaction on the lateral compartments. The technique can replicate the pre-arthritic joint line and maintain both cruciate ligaments, and a cylindrical axis is completely constructed. Moreover, the bone-cutting surface can be set in parallel to the joint line, which might be beneficial to load transmutation.