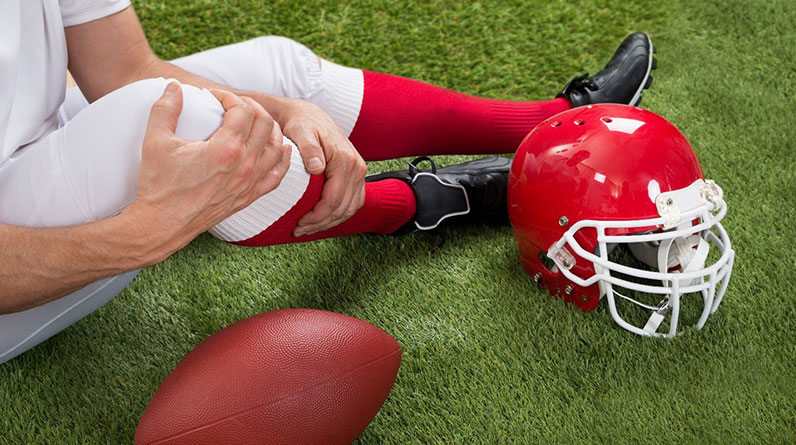 Football is a high-contact sport made most popular in the United States. Because of the physical nature of the sport, injuries are a common occurrence. In addition, due to the level of physicality involved, certain injuries are more common than others.

What follows will be a discussion of the most common football-related injuries, likely causes of each, and tips on how to prevent them. While not all injuries can be prevented, there are proactive steps that can be taken to ensure that the body is the most prepared for playing football.

Hundreds of thousands of young people and adults visit their doctors, medical clinics, and emergency centers for football-related injuries every year.

Additionally, in the first four weeks of the 2020-2021 NFL season, a reported 3,025 injuries were sustained. A typical NFL season spans 18 weeks, not including the postseason time frame.

Lastly, several lawsuits regarding sport-induced concussions in professional football players have reached a point of national news in recent years due to the prevalence and general concern for players’ long-term health.

While football does use protective equipment, it’s still a fast-paced, high-intensity, impact-based sport. Injuries, both minor and traumatic, are going to occur.

Like many sports, there are a variety of causes of different injuries at different severity levels. These include but are not limited to overtraining, lack of recovery, and in-game incidental contact. The most common injuries in football are those of traumatic severity, such as concussions and muscular or ligament tears.

The following are the most common football-related injuries:

Concussions are one of the most common injuries in football and contact sports in general. While there is a naive perspective surrounding concussions, especially in sports, they are serious injuries in the category of traumatic brain injury.

Upon impact, the brain shakes back and forth within the skull. The ultimate result of this brain movement within the skull is brain cell damage, which can sometimes be extensive.

According to the NSC, being struck by another person or object is the leading cause of unintentional injury for teens and young adults ages 15 to 24. Further, it’s estimated that 1.6 million to 3.8 million athletes annually suffer a concussion. While not all concussions are related to football, it does happen to be one of the most prevalent injuries seen in football players.

These career-ending or career-altering ligament injuries are most often the result of rapid changes in motion during play, impact, or faulty movement (i.e., a trip, fall, or twist).

Fractures or broken bones are a common occurrence in many sports, football included. The most common locations of a fracture in football are the finger, hand, wrist, and foot.

The causes of a fracture are several. Depending on the location, a fracture can be secondary to overuse, impact, or excessive movement of a given limb.

The most common form of tendonitis in football is Achilles tendonitis, though it can develop in other regions of the body, such as the elbow. Tendonitis typically results in stiffness, aches, and painful movement. Depending on the severity level, tendonitis can keep a player out of action for some time.

Sometimes tendonitis can develop into a more significant injury like a tendon tear or rupture. For example, a common injury in football is an Achilles rupture.

This category of injury, though less severe, is the most common occurrence in all sports, not just exclusive to football. This is because sport requires such physical demand that the body is put under a lot of stress.

It’s almost inevitable then, depending on the frequency, intensity, and level of play, that these minor impairments will occur over time.

Injuries such as ankle sprains, rotator cuff strains, hamstring strains, and lower back strains are all very common in football. The good news is that these types of minor injuries can often be prevented.

If a carefree attitude is maintained towards preventative behavior, these injuries can lead to a much more severe problem, such as a tear, rupture, or fractured bone.

Prevention is the best medicine for any disease, condition, illness, or injury. Luckily, many football-related injuries, and sports-related injuries in general, can be prevented.

In fact, According to the U.S. Consumer Product Safety Commission, more than 920,000 under the age of 18 were treated in medical clinics for football-related injuries, most of which could have been prevented. It is also true that unavoidable accidental injuries occur with any sport, even with the best preventative measures.

The following are the most common and effective preventative measures athletes can take to prevent, or at the very least, reduce the risk of such injuries occurring:

The most common ways for injuries to occur outside of accidental happenings or traumatic impacts are a lack of hydration, tightness & stiffness due to lack of stretching, overtraining, and taking part in activity when you’re not properly warmed up.

All of the above are surefire ways to increase your risk of injury. Combatting them is the recipe for prevention.

The speed at which one tends to an injury has a direct correlation to the quality and speed of healing. In contrast, ignoring symptoms, especially of injuries such as concussions, can lead to severe complications.

One of the most important things is to seek timely care. If symptoms of an injury persist, additional medical attention should be obtained.

Following preventative tips, as discussed, can significantly reduce the risk of football-related injuries for the athlete.